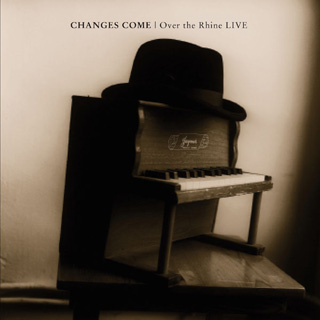 Changes Come | Over the Rhine LIVE

This instamatic sonic snapshot of an Over the Rhine concert was recorded directly through a front-of-house mixing console one night in the Fall of 2003 by our sound engineer Mike Sponarski, aka Spinner. If you weren't able to join us, this is our little postcard from the edge: Wish you were here.

This collection is not available in stores. It's for our best fans. You.

A great filmmaker once said that movies are never finished, only abandoned.

If Changes Come, the new live album from Over the Rhine is any indication, the same principle could also be applied to music. The celebrated Ohio twosome has released plenty of knockout songs over the years, but these new live versions make the originals sound like rough drafts, orphan compositions that were abandoned and, with this new recording, revisited and perfected.

It may sound impossible. I know I was skeptical when I first began to hear about this amazing sonic document of the band’s recent tour. But, as incredible it may sound, every last song on the thirteen-track Changes Come outshines its predecessor in every way, making this the essential Over the Rhine collection.

Fittingly, the song selections are mostly drawn from Ohio, last year’s masterful two-disc opus. After the haunting prelude of the rare “Spinning,” the band cranks the intensity up to full blast with a faster, bolder version of “Show Me.” Singer Karin Bergquist immediately makes it clear that her astounding performance on Ohio was no fluke; she has obviously hit the high point of her career thus far as a vocalist, stretching her words out like rubber bands, mining every syllable for its maximum potency.

And the hits just keep coming. “Nobody #1” begins as a funky spoken-word rap, but organist Linford Detweiler turns it into an electrifying gospel number by the end of the song. “Suitcase” is delicate, reflective, and heartbreaking, with multi-instrumentalist Paul Moak backing up Karin with harmony vocals. “Ohio” is darker and more turbulent than its source version. And “Cruel and Pretty” drifts by on a dreamy, irresistibly jazzy groove.

Another jazzy piece, “Lifelong Fling,” is an album highlight. Here Detweiler and Moak trade off solos, and Karin’s smoky vocals give it enough sensuality to help it dethrone “The Body is a Stairway of Skin” as the sexiest song in the OtR canon. It segues brilliantly into a swaggering, rock and roll cover of Bill Wither’s “Ain’t No Sunshine.” You’re unlikely to hear a more beautiful nine minutes of music all year.

Some of the album’s brightest gems, though, are culled from past OtR recordings. “All I Need is Everything,” for example, gets a killer rock and roll makeover. It’s one of the mot energetic and exhilarating things Over the Rhine have ever done, and I’m going to have a tremendously difficult time going back to the original.

“The World Can Wait” is simply astonishing, as intense and transcendent as U2’s finest work, but the album’s biggest surprise is “When I Go,” which appears here in a stunning ten-minute long rendition, starting as a sparse folk song and eventually working its way into a furious frenzy of electric guitars and drums. It’s the hardest rocking thing to ever make its way on to an Over the Rhine album.

Still, it’s “Changes Come,” the album’s finale, that proves to be the most inspiring and powerful number. Those who have heard the original are already familiar with this heartbreaking musical prayer; the electrifying live treatment it’s given only makes it more potent.

If the album has a downside, it’s that it’s not available in stores. But you, dear reader, are in luck, for I am about to give you a link to the one online store that carries it: Clicketty click! Now make haste to order this sonic Polaroid of a truly transcendent concert, the best recording yet from America’s best kept musical secret.