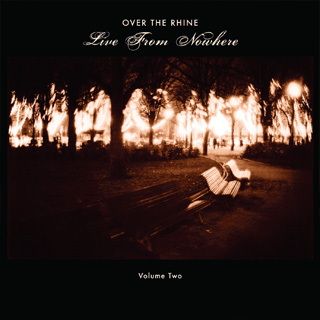 Download
iTunes
1. I Want You To Be My Love
2. Fever
3. Failed Christian (Ash Wednesday Mix)
4. Long Lost Brother
5. Everybody Wants To Feel Like You
6. Jesus In New Orleans
7. Anything At All
8. North Pole Man
9. Little Did I Know
10. Orphan Girl
11. Baby It’s Cold Outside
12. Hush Now (Tipsy Gypsy Mix)
13. OtR: Off the Rails
Notes and Commentary

In early 2006, Over the Rhine completed an unforgettable tour of New Zealand including four sold out shows in Wellington, at the International Arts Festival. We rubbed shoulders with flamenco dancers from Spain, trapeze artists from France and musicians from just about everywhere. Sauvignon Blanc may never, ever, taste so good again.

We returned to the USA in time for a couple of whirlwind appearances at South by Southwest in Austin, Texas. Not too long thereafter, the band embarked on four weeks of dates sharing the bill with Hem — slow-burn, kindred spirits from Brooklyn. Along the way we managed to perform in various radio and television studios (sometimes in front of an audience, sometimes not) including a 60 minute session taped for XM Radio.

After scattered summer appearances, we played as an 8-piece ensemble down by the Ohio River in Cincinnati at Tall Stacks Festival and helped the moon rise over the suspension bridge. In November, we joined Cowboy Junkies for a freewheeling musical train ride across Canada, and stepped off the train in Jasper, knee deep in a winter wonderland.

We ended the year with a limited release of our new Christmas record, Snow Angels, and mostly laughed our way through one of our most memorable Christmas tours ever.

And we even found time to take the band to Echo Park (one of our favorite recording studios) in Bloomington, Indiana, for a weekend, where we gathered ‘round, rolled tape and played whatever we felt like playing at the time, just to see what would happen if we did.

Well, here’s some evidence that it all really happened. This is Volume Two in a series – an annual tradition we’ve begun, which we hope will eventually feel like a handful of rare musical postcards made for our closest friends. We are truly blessed that you care enough to listen in. Thank you, thank you, thank you.

Thanks to Jake and Mickey and Paul for helping breathe new life into these songs. Thanks to Brandon for taking such good care of us on the road and to Juicy for mixing the band’s sound night after night. Thanks to Michael and Bill for the photographs and thanks to Owen for the design. Please visit OvertheRhine.com for much more.

Turn it on up a little louder and enjoy,
Over the Rhine

I Want You To Be My Love

I like to introduce this song in concert by saying that sometimes Karin and I have a contest to see who can write the simplest song. No fancy words, no fancy chords, but you have to feel something on your skin.

She won this one.

I love it when these little musical snapshots surpass the original recordings. I think this version may have.

This classic tune was first recorded in Cincinnati, Ohio, of all places. We’ve recorded several versions of our own – it has a way of reinventing itself. This is our 2006 arrangement. I’m trying to play the piano like an old man.

Jack Henderson first played this song for us. It appears on the Nick Lowe record called, Dig My Mood. That’s a great record by the way, well worth owning. Failed Christian was written by someone we know nothing about: Henry McCullough. Our prayer has always been that our music will encourage real conversation, and if this song doesn’t get some conversation going, I’m not sure what will.

We’ve met a lot of people that would identify to some degree with the character in this song, and it seems they very seldom have a platform to express the way they feel. We hope our music gives people a voice who may otherwise feel like no one’s listening.

We were leaning toward not including the song on the record, and then on Ash Wednesday, Juicy stopped by the farm and we played it, and we all immediately realized that we had to include it. Juicy said, Think of all the times in the Psalms when David felt like a failure. It’s confession. It’s real.

Karin likes to refer to the drums at the end as, The Cleansing Loop.

We thought this was a good follow up to the previous track. This is another one that may have surpassed our original recording, hard to say. This song was recently featured by some Nuns on their website. We thought maybe we’d tour some convents, but then we remembered that the Abbeys have the bourbon-soaked fudge.

We recently got to play the Ann Arbor folk festival right before John Prine, and I kept wondering if Karin was going to kneel down and kiss the stage like Chrissy Hynde did when she opened for Neil Young. Regardless, John Prine is an American treasure. Karin got this tune stuck in her head, and decided to give it a spin. It’s not one of John’s better-known songs by any means (co-written by Keith Sykes), but I liked Karin’s take on it. It appears on John Prine’s The Missing Years.

Jesus In New Orleans, Anything At All

These songs from our double album OHIO still regularly turn up in our sets and still often manage to feel sort of new somehow.

Check out Mickey’s fab falsetto! You can hear the original version on our brand new Christmas CD, Snow Angels.

Little Did I Know

Just another one of those make-out jams we’re occasionally known for. The original version of this tune appears on our CD Drunkard’s Prayer.

We’re glad to finally have a concert recording of this oft-requested song that was written by one of our favorite songwriters, Gillian Welch. That’s some pretty decent banjo playing Paul – not bad at all for a symphony orchestra violinist!

Ladies and Gentlemen, we present an exhibit in good singing and not so good singing. This song was written by Frank Loesser, another prominent contributor to The American Songbook. Frank’s son John has a contagious enthusiasm, loves good music, and has become a friend of ours.

We thought the boys gave this kitchen waltz a nice gypsy swing.

This was a completely spontaneous barnyard stampede of sorts that happened after Jake happened to say, One, Two, Three, Four. Who knew Karin could play mouth trumpet like that? I certainly didn’t. But she reminded me she was 4th chair trumpet in high school for a minute.