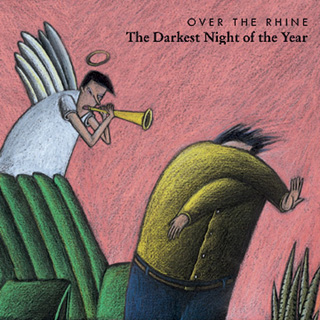 The Darkest Night of the Year

See Mary dance with the light on her shoulders
She has a secret, like a lover discovers her
Guardian angel with limbs white as lambs wool
Expensive perfume on her feet

these are the (whose are the?)
these are the ordinary clothes
you and me
around extraordinary flesh and pulsing madness deep and close
who
someone breathed this breath in us
"oh amelia maybe we're not that far
oh amelia is this who we really are
my amelia"

13. A Little Lower Than The Angels
Commentary 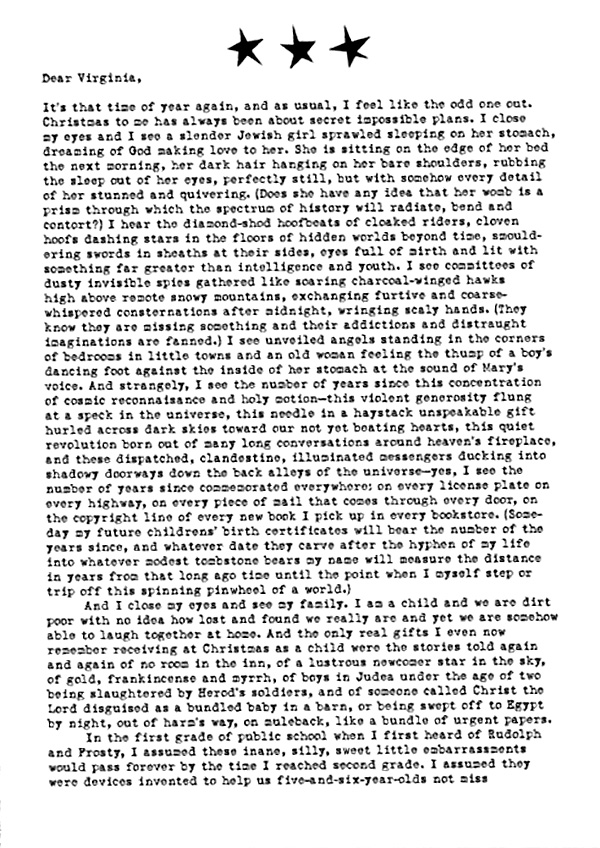 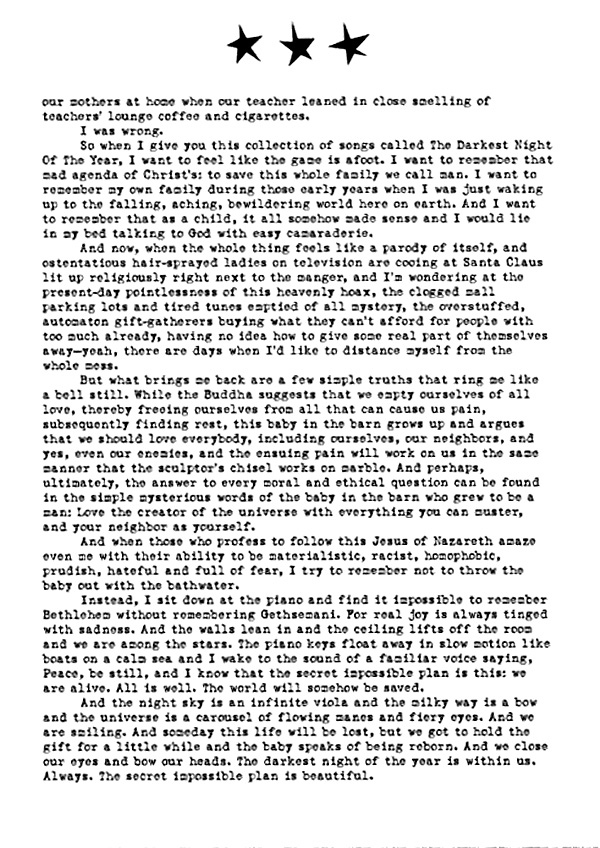 There is a white wooden church in the grey town of Fairpoint, Ohio where my father was minister for four years. Every Sunday Morning at about 11:25, the coal train would rumble by, all whistles and steel to shake our faith. While the train cars rolled not more than fifteen yards from the front steps of the church, off to stoke the fires of the world, my father was inevitably silent for awhile.

But it was in that old church that I first lined up with six or seven other children to sing "While Shepherds Watched Their Flocks by Night," dressed in flannel robes and headbands, stretching our falsettos under the stained glass windows black as any Bible with the night of December.

The church must have been lit only with candles and in that shadowy dark, groups of little people and then grown-ups too ambled on and off a tiny stage, giving whatever they had to give.

"And, lo, the angel of the Lord came upon them, and the glory of the Lord shone round about them; and they were sore afraid."

Afterwards, each of us children, who for weeks had tried to anticipate just which line we would forget, were handed an apple and orange. And, lo, someone had polished the apples to a gleam and the oranges were big and sweet enough even for children.

A few years passed. My father and mother spun gold from straw and sent my two older brothers, Conrad and Jonathan and my sister Grace Elaine two thousand miles away to a boarding school in Western Canada. It was too far for them to come home that first Christmas so my father produced a portable tape recorder and we leftover children took turns playing pieces on the piano and reading poems or verses into the microphone. Then we all sang a few Carols together in tentative tremulous harmony and mailed off our tape to Canada in a wrapped box with homemade molasses crinkles and vinegar candy and zucchini bread.

I later attended the same school and my parents moved to Montana for six years to be closer. Every year the school would put on a Christmas Program on some night in December and a few thousand farmers would stream in from the prairies of Alberta and even Saskatchewan. And my parents too would drive to the school along with other parents and I would watch the tears on my father's face during the Hallelujah Chorus. (I was in the ninth grade.)

All during high school, for four years, I got to go home for three weeks to Montana for Christmas. And every year my brothers against all odds would get me excited about coyote hunting. In those days a full-grown coyote hide brought $125 and everybody knows Montana is full of coyotes. We would be up in the black of morning, carrying rifles and knives into freezing foothills or river bottoms, daring anything to move. In four precious years of Christmas vacations, with a wallet so empty you could yawn into it, I saw porcupines, mule deer, jack rabbits, owls, and even wild horses. We didn't so much as scratch a coyote.

But in the exhausted evenings we would be home and fed and there was always the smell of wood smoke and the sound of the piano for consolation.

After high school I drifted back to Ohio on autopilot to go to college and study music and that all came and went quickly and left me nowhere humming quietly to myself. And it doesn't matter anymore how those of us in Over the Rhine got together. We saw a beautiful woman off in the distance and someone told us if we worked for seven years we could have her. (Jacob ended up with the wrong woman for all his trouble, but Jesus Christ still came through her lineage.)

A couple of years into the whispering history of our Ohio music group, we were invited to play some songs at Christmas time which were broadcast to much of Southern Ohio on a cold Friday. Karin and Ric and I (Brian was bussing dishes at The Diner) performed some Carols on acoustic instruments along with some of our own songs and instrumental asides, and Karin sang of course, and then read "The Oxen." It never even once occurred to me at the time, that we had pieced together something virtually identical in spirit to the after dark Sunday Night Christmas Programs of my childhood, John Detweiler presiding. The only thing missing was the coal train.

A few years later we played a Christmas Concert at the Emery Theatre in the neighborhood of Over-the-Rhine. On a ragged stage that had been graced by George Gershwin, Fred Astaire, Toscanini and Houdini to name but a few, we spun a modest song cycle of our own material, but mixed in renditions of Traditional Carols as well. To our surprise, the house was packed, and some of those in attendance wrote to us wondering if we had intentions of recording any of the Christmas Songs.

We played another Christmas Concert at the Emery last December, and another radio program, and worked up a second version of Silent Night, (Mary's Waltz had turned up a few weeks prior) and by this time as we walked on and off stage in every conceivable configuration, it was obvious to me what we were doing. And I couldn't help grinning to myself.

We'll be playing the Emery Theatre for the third year in a row December 21, 1996, the night of the Winter Solstice, and including nine other cities across the Midwest in a preceding fortnight of dates. This recording gathers together some of our little renditions from the few Decembers past.

But if I could go back and gather together those forty or fifty people in Fairpoint, Ohio, Billy Maxwell, a boy I haven't seen in 20 years, the Blind Piano Player, who would crack walnuts and stain his fingers while listening to scratchy records, the Henry's, a big robust black family with boys with real muscles and sideburns, the Androsko's, who sold their old weedy farm to the coal company and bought a new double-wide on the edge on the edge of town and a new Nova, and Bill Butler from Nicolazake's Tavern and Edith Morgan and Bubbles and Pistol Pete and that family who would only come once in a while with the delicious lost blonde girls, universes away on the other side of the sanctuary, and if they would lay those railroad tracks back down and if the coal trucks would shamble back to town one after the other shifting dusty gears up and down the curving hills, and if Sulphur Creek would turn once again the colour of rust, and inside the church, if my father would make everything black as Bethlehem, it would be so still on a Sunday Night, it would be December again in Ohio.

Then Chris and I would walk to the front to the tiny stage and lean into The First Noel with our black lungs and it would truly be The Darkest Night of the Year.

It Came Upon A Midnight Clear (2:50)
arranged: Detweiler

Thank You My Angel (4:12)
words and music: Detweiler, MacDonald, Powell

A Little Lower Than The Angels (7:10)
music: Hordinski

ACKNOWLEDGMENTS.
Thanks to Todd Kearby and Shelly Ross for embracing the vivid chaos.
Thanks to Kerry Faye.
Thanks to Karen Jean and Mallory and Sarah.

We are overwhelmed at the thought of trying to thank all of you by name who have given generously of yourselves over the last years. We open that door and peek in and we are rich. Thank you.

This record is for Chris Herrala, and anyone wrestling with their own dark angel this Christmas.

Thanks to The Imaginary Apple Orchard. Thanks to all Rhinelanders.
Let the lower lights be burning. (Quiet music should be played loud.)

"Take a deep breath. Relax. Over the Rhine's Darkest Night of the Year is the Christmas disc of the year and destined to become a classic. This is not a loud collection of rock-n-roll holiday tunes to help speed shopping or tree decorating. This disc is peace on earth. Curl up with someone you love, or enjoy some quiet time alone; The Darkest Night of the Year is the perfect soundtrack. The album starts as if far away and indiscernible and comes into focus, setting the mood for simplicity and beauty. All of the arrangements show creativity and freshness where most Christmas albums go for the ordinary and the expected. A delightful collection of traditional carols and original compositions, all with the signature OtR ambience. Let the lower lights be burning..."
- Ed Rock, Net Central

"This delicate moody collection isn't new (it was released in 1996), but it doesn't matter. You simply must hear the evocative renditions of these selections by the critically-acclaimed Cincinnati band."
- Dave Urbanski